Lotty Herschel is in prison in my short story, “Safety First.” This story is one of many original stories and pieces of art created for the anthology It Occurs to Me that I am America. All royalties from the sale of this book will go to the ACLU as they fight for our Constitutional rights.

Lotty Herschel is in prison in my short story, “Safety First.” This story is one of many original stories and pieces of art created for the anthology It Occurs to Me that I am America. All royalties from the sale of this book will go to the ACLU as they fight for our Constitutional rights. Simon & Schuster, the publishers are making an additional donation of 10 % of the hardcover price on all copies sold before midnight, January 15. It’s a great anthology, with contributions from Mary Higgins Clark, Louise Erdrich, and Alice Walker, among many others.

Here’s an excerpt from my story. Will Lotty make it out of prison? Where’s VI Warshawski? Buy It Occurs to Me that I am America and learn the whole story. Or look at Art Spiegelman’s graphic short story, or Stephen Carter’s work, or any of the dozens of other fascinating contributions. 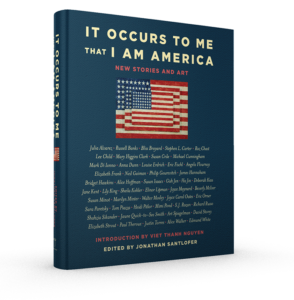 She guessed that cameras, or at least microphones, were hidden in the cell. Possibly in the showers, the cafeteria, even the attorneys’ meeting rooms. From the moment of her arrest until the day of the trial, she said nothing inside the prison, except immediately after her arrest, and that was only to repeat a demand for a phone call. Finally on the fifth day, when she’d been kept sleepless and could no longer be sure of time, a guard handed her a cell phone and told her she had thirty seconds, and if she didn’t know the number, they weren’t a phone directory, so tough luck.

Once she’d made the call, she became mute. She didn’t speak to the assistant attorneys for the Northern District of Illinois sent to interrogate her, nor to the guards who summoned her for roll-call four times a day, or tried to chat with her during the exercise period. Because she was a high-risk prisoner, she was kept segregated from the general population. A guard was always with her, and always tried to get her to speak.

The other women yelled at her across the wire fence that separated her from them during recreation, not rude, just curious: “Why are you here, Grandma? You kill your old man? You hold up a bank?”

One day the guards brought a woman into her cell, a prisoner with an advanced pregnancy. “You’re a baby doctor, right? This woman is bleeding, she says she’s in pain, says she needs to go to the hospital. You can examine her, see if she’s telling the truth or casting shade.”

A pregnant woman, bleeding, that wasn’t so rare, could mean anything, but brought to her cell, not to the infirmary? That could mean an invitation to a charge of abuse, malpractice. She stared at the pregnant woman’s face, saw fear in her face and something less appetizing, something like greed, or maybe unwholesome anticipation. She sat cross-legged on her bunk, closed her eyes, hands clasped in her lap.

The guard smacked her face, hard enough to knock her backward. “You think you’re better than her, you’re too good to touch her? Didn’t you swear an oath to take care of sick people when they gave you your telescope?”

In the beginning, she had corrected such ludicrous mistakes in her head. Now, she carefully withdrew herself from even a mental engagement: arguing a point in your head meant you were tempted to argue you it out loud.