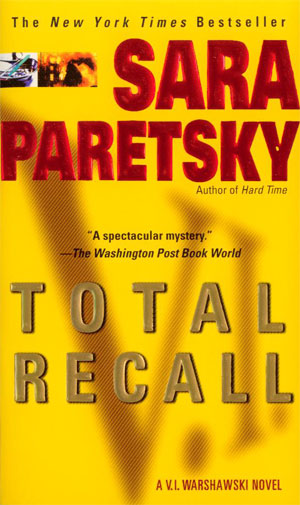 When a man claiming to be a survivor of the Nazi death camps seeks out his family among Lotty Herschel’s circle of friends, he forces her to confront a memory from the war she has long refused to think about. As a frightened V.I. watches her longtime friend and mentor unravel, she comes to Lotty’s help in the only way she know how—by investigating the survivor’s past. A case of insurance fraud on Chicago’s south side which V.I. is also investigating leads her to an international conspiracy reaching back to Nazi Europe and gives her the unexpected means to help save her friend.

Reviews and Quotes
Already having established herself as an inventor of the female private eye and a master of the mystery format, Paretsky skillfully expands the form to tackle several convergent themes in a moving novel of discovery and redemption. V.I. “Vic” Warshawski has a traditional mystery to solve: the life insurance policy of black factory worker Aaron Sommers had been faithfully maintained, paid for weekly even when other demands surely seemed of greater urgency. But when Aaron’s widow needed to collect, the company denied the claim, saying the policy had been cashed a decade earlier. That leads Vic to Ajax Life Insurance Co. and Ralph Devereux, whom she encountered in her very first case, Indemnity Only (1982). Her investigation is subtly intertwined with another much more personal and wrenching inquiry into the appearance of a man calling himself Paul Radbuka, whose recovered memory as a child survivor of the Holocaust leads him to claim a kinship with Vic’s friend Max Loewenthal. Radbuka’s claim has an unexpected and drastic affect on Lotty Herschel, Vic’s friend and mentor. The twin investigations allow the author to explore simultaneously the issues raised by the Illinois Holocaust Asset Recovery Act and the issue of reparations for the descendants of slaves. Dark, absorbing, probing Paretsky’s novel explores the complex web of degrees of guilt and complicity surrounding the fate of Holocaust victims and survivors, with Lotty’s story emerging with compelling, terrible clarity and inevitability.
— Publishers Weekly

You can’t accuse Sara Paretsky of resting on her laurels. Total Recall is written with the stylistic verve and intellectual energy of a writer just coming into her own. V.I. has no idea of the anguish she will cause Lotty Herschel, the elderly physician who has long been her cherished advisor and friend when she tries to validate the shaky identity claims of a Holocaust survivor nor could she have predicted how her efforts to solve a piddling case of insurance fraud would ignite a political bonfire. But having put a match to these volatile issues, V.I. is too principled to back off. She has created a memorable character in Lotty, whose moving tale of survivor guilt shames every other voice into silence.
— The New York Times

With her gift for developing plots in a tight, coherent fashion, Paretsky delivers two interesting mysteries [about the Holocaust and insurance fraud], then links them with a compelling look at the issue of political reparations. She develops this theme by juxtaposing two highly emotional subjects: granting monetary awards to African-Americans to make ammends for slavery and forcing insurance companies and banks to prove that they are not holding Holocaust victims assets. All in all this is a wrenching tale.
— USA Today