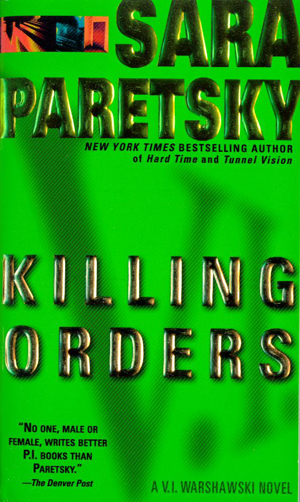 Killing Orders, V.I. Warshawski’s third adventure, starts when her great-aunt Rosa summons the detective to her cold suburban home. Rosa made V.I.’s childhood miserable and the detective resents the command to help her aunt prove she didn’t embezzle five million dollars from a local Dominican priory.

All hell breaks loose when a mysterious opponent tries to take Vic off the case by throwing acid in her eyes and burning down her apartment. And when a friend who’s involved in the case is brutally murdered, it begins to look as if Vic hasn’t got a prayer.

But Warshawski continues to follow every lead, even when they point to some pretty unorthodox conclusions: Perhaps the Dominicans are covering up a financial scandal. Maybe the whole conspiracy is under the patronage of an international conglomerate, or of Don Pasquale, king of the Chicago mob. Worst of all, someone who’s close to Vic could be involved—her darkly handsome English lover, Roger Ferrant, or even Aunt Rosa herself.

Reviews and Quotes
Killing Orders is Paretsky’s third novel featuring Victoria, or Vic, Warshawski, but it is the one with which she has shouldered her way through to the front rank of American crime writers with a front-page interview in the New York Times Review of Books. Deservedly so; Paretsky has done something new. Her achievement lies in the creation, in Vic, of a wholly successful character whose like I have not encountered before. She is tough, shrewd, intelligent, a feminist and all these characteristics are conveyed with the very lightest of touches—there are not discordant diatribes on sexual politics here. …The plot is first-class: called in by an embittered aunt to investigate the theft of three million dollars in share certificates from the safe of the local Catholic priory, Vic finds herself embroiled in murder, high finance, Vatican politics, the Mafia and the Calvi scandal. Sara Paretsky’s book is not only a joy to read; it restores politics to its rightful place in the mainstream private eye novel, and in doing so revitalises the tradition.
— New Statesman

“When I started writing, I wanted to do something very different about the way women are depicted in detective fiction,” says Miss Paretsky, the Chicago writer whose name always makes the top of the list when people talk about the new female operatives. “As a reader of mysteries, I always had trouble with the way women are treated as either tramps or helpless victims who stand around weeping. I wanted to read about a woman who could solve her own problems.”
— New York Times Book Review

Who are the best on the beat? V.I. “Vic” Warshawski, Sara Paretsky”s Chicago-based detective, is arguably the top of the line—attractive, intelligent, tough and vulnerable. In her third and latest caper, Killing Orders, she bucks the Mafia, the Vatican and an international conglomerate.
— Playboy

"No one, male or female, writes better P.I. books than Paretsky." — The Denver Post