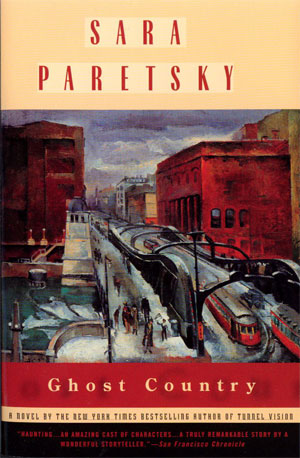 The gritty adventures of V.I. Warshawski have made the Chicago PI a marquee name among today’s sleuths and turned her creator, Sara Paretsky, into one of the mystery world’s most popular authors. So it’s rather surprising that Paretsky risks her commercial success with a new book that veers sharply from the sure-bet Warshawski series. But Paretsky’s latest may be her best book yet; it shows amazing depth and emotion, offers richly complex characters and a stunningly original plot, and provides subtle but caustic commentary on today’s social problems.

I’m sending you a book that isn’t about V.I. Warshawski, and I feel a bit nervous, wondering what you’ll think. I haven’t lost interest in V.I., but the urgency that pushed me to create her fifteen years ago was prodding me to write this different story.

Don’t laugh, but it started one night at the opera, at Mozart’s Magic Flute, as I watched the Queen of the Night get punished for not submitting to male authority. Her daughter is taken from her and turned against the Queen and all her self-possessed, self-asserting ways. In the midst of Mozart’s wondrous music I felt despair, as I thought of generations of parents training their daughters to abandon a sense of self. I thought, nothing will change this, unless the ancient goddess Ishtar returns and remakes human society. I went home and wrote sixty pages about the goddess, but while I wish for magic, I can’t quite believe in it. I put the story aside.

And yet, as the millennium nears, the yearning for signs—of miracles, of the divine—seems to be on the rise. People report seeing the Virgin Mary weeping blood on a garage wall in Kansas and from statues in Italy. She’s appeared in a Croatian football field, and a Mexico City metro stop. At the same time, I’m acutely aware that the numbers of those who need true miracles to save them—the homeless, the desperately poor or afflicted—are also rising, while the funds and the compassion to serve them are shrinking. Two years ago, while I was visiting a group that helps the mentally ill homeless, the minister director said he often imagines Jesus on the steps of a Chicago hospital, turned away because he doesn’t have a green card.

My vision of Ghost Country came that morning: the sacred and the dispossessed, meeting on the streets. I decided the time had come to recast my railings against Mozart onto the streets of Chicago with real people (including a failed diva to placate Mozart’s ghost), rich and poor, whose lives have unraveled. A homeless woman named Starr enters halfway through the novel and changes them all forever. I myself could never decide whether Starr was just a woman of intense empathy, or a manifestation of the divine. Whatever you decide, I hope that Starr, and the raggedy group around her—a drunk diva, a troubled adolescent, an overworked psychiatry resident—speak to you, and maybe allow you to believe that a kind of magic is still possible.

Reviews and Quotes
Harriet and Mara Stonds have been raised in luxury by their grandfather, famous neurosurgeon Abraham Stonds. Harriet is the apple of her grandfather’s eye—tall, blond, successful at everything she does, always the good girl. Mara plays the role of ugly stepsister, at least to her grandfather, who has told her for years that she’s lazy, stupid, and ungrateful. But things are about to change for the Stonds family.

A drunken opera singer, a softhearted psychotherapist, a group of homeless women, and a mysterious visitor who performs miracles will each play a key role in opening the eyes of Harriet and Mara to a world they’ve never imagined. This book is rich, astonishing, and affecting, and Paretsky deserves rave reviews for taking a huge risk and doing so with amazing success. An outstanding novel and a great read.
— Booklist