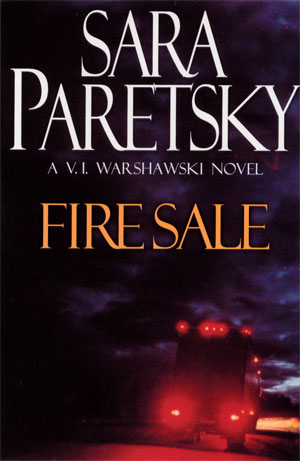 V.I. Warshawski may have left her old South Chicago neighborhood, but she learns that she cannot escape it. When V.I. takes over coaching duties of the girls’ basketball team at her former high school, she faces an ill-equipped, ragtag group of gangbangers, fundamentalists, and teenage moms, who inevitably draw the detective into their family woes.

Through young Josie Dorrado, V.I. meets the girl’s mother, who voices her worries about sabotage in the little flag manufacturing plant where she works. The biggest employer on the South Side, discount-store behemoth By-Smart, pays even less, and Ms. Dorrado doesn’t know how she’ll support her four children if the flag plant shuts down.

The elder Dorrado’s fears are realized when the plant explodes; V.I. is injured and the owner is killed. As V.I. begins to investigate, she finds herself confronting the Bysen family, who own the By-Smart company. Founder William “Buffalo Bill” Bysen, now in his eighties, has four sons who quarrel with each other and with him; the oldest, “Young Mr. William,” is close to sixty and furious that his father doesn’t cede more power to him. And then, there’s “Billy the Kid,” Young Mr. William’s nineteen-year-old son, whose Christian idealism puts him on a collision course with his father, his grandfather, and the company as a whole.

When Billy runs away with Josie Dorrado, V.I. is squeezed between the needs of two very different families. As she tries to find the errant teenagers, and to track down a particularly cruel murderer, her own life is almost forfeit in the swamps that lie under the city of Chicago.

Reviews and Quotes
Once she has the bit between her teeth, nobody—not her current lover Morrell, her former lover Con Rawlings, her stubborn neighbor Mr. Contreras, or golden retrievers Peppy and Mitch—can stop Vic from seeing justice done. Warshawski’s tense, sharp 11th shows that you really can go home. — Kirkus Reviews (starred review)

Packed with social themes and moral energy, held together by humor, compassion and sheer feistiness, this novel shows why Paretsky and her heroine are such enduring figures in American detective fiction. — Publishers Weekly (starred review)