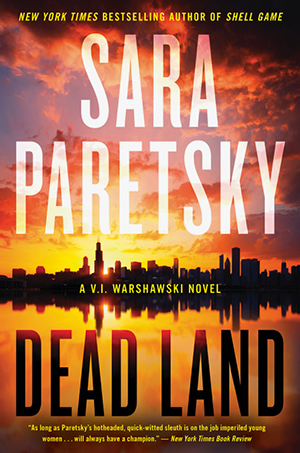 Chicago is the city of broad shoulders, but V.I. Warshawski knows its politics: “Pay to Play.”  Money changes hands in the middle of the night; by morning, buildings and parks have been replaced by billion-dollar projects.

Private investigator V.I. gets pulled into one of these clandestine deals when her impetuous goddaughter Bernie tries to rescue a famous singer-songwriter, now living on the streets.  Thanks to Bernie, V.I. finds herself in the path of some developers whose negotiating strategy is simple: they bulldoze – or kill – any obstacle in their way.

Questions pile up almost as fast as the dead bodies.  When she tries to answer them, the detective finds a terrifying conspiracy stretching from Chicago’s parks to a cover-up of the dark chapters in the American government’s interference in South American politics. Before she finds answers, V.I. will be pushed close to breaking point.   People who pay to play take no prisoners.

"As long as Paretsky's hotheaded, quick-witted sleuth is on the job, imperiled young women...will always have a champion." — The New York Times Book Review