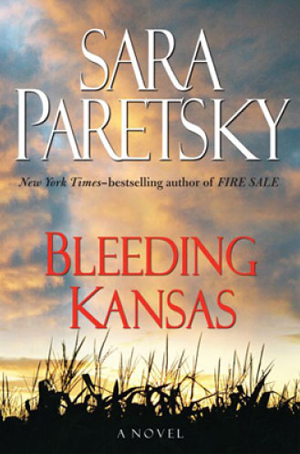 Bleeding Kansas is about how the lives of ordinary people are affected by events over which they have little control. The book centers on the Grelliers and the Schapens, two families who have been farming in the Kaw River Valley for over a hundred-fifty years, and how their lives are affected by war and by the changing sexual and religious mores of the day. Susan Grellier, who yearns for the large sacrifices made by her husband’s pioneer ancestors in the battle against slavery, causes major upheavals in the lives of her husband and two children.

When Gina Haring, who may or may not be a Lesbian, and who practices pagan rites, moves into an empty house near both the Schapen and Grellier properties, Susan’s involvement with her also stirs up the wrath of the Schapen clan, who are extremely conservative in their Christianity. Susan’s decision to join Gina in opposing the Iraq war has cataclysmic results for her family. Gina has her own secrets, her own reasons for being in the Kansas countryside, and they’re not necessarily what the people around her imagine.

Susan Grellier’s ardor for the anti-war cause so infuriates her son that he enlists and is killed, much to the glee of the Schapens, who celebrate every disaster that affects the Grelliers. His death devastates Susan, who retreats into a lethargy that nothing can shake. Not even the problems of her daughter, Lara, can rouse her.

The Schapens are dairy farmers; one of their cows gives birth to what they think may be the Perfect Red Heifer, which the Torah requires for temple sacrifices. The extreme fundamentalism to which the Schapens subscribe means they want the temple rebuilt in Jersusalem—only then can Christ return, since he has to have a temple to destroy to fulfill New Testament prophecies. When the calf starts speaking ancient Hebrew, their dairy farm becomes a nine-day wonder.

The book comes to its climax in the little shed the Schapens have built for their calf. Susan ultimately has to rouse herself to rescue her daughter from imminent danger, but no one leaves the book completely unscathed.